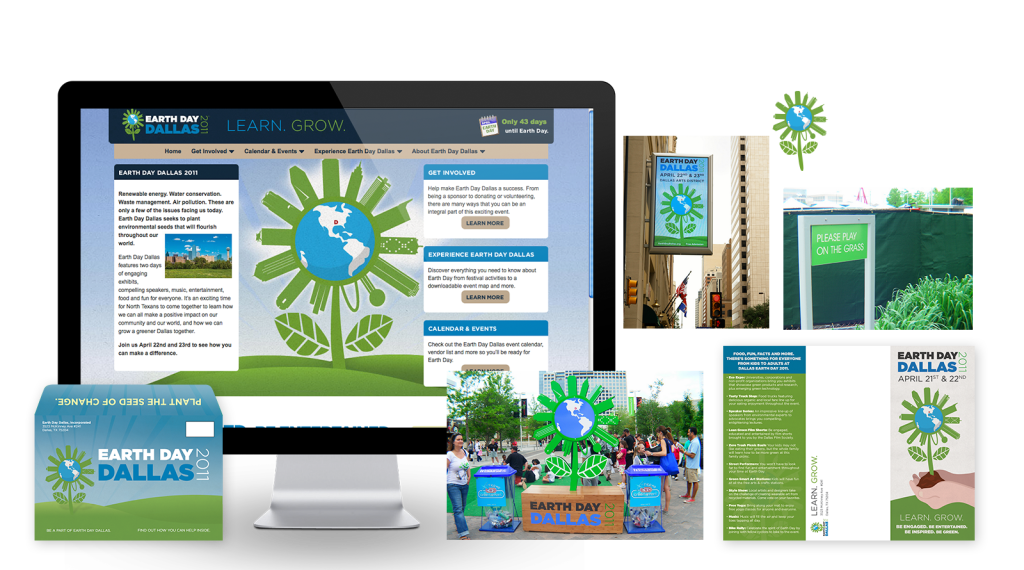 Abstract Explosion handled the majority of this brand launch turn-key. Starting with the logo, the vision was brought to life with a Dallas skyline as the pedals of a flower. This Earth Day Dallas logo later morphed into what is now the Earth Day Texas logo. Simple, active colors were used across the brand with a strong heavy font. This design lent itself well to all the event collateral making for a very consumer-focused and sticky brand identity.

Earth Day Texas (formerly Earth Day Dallas) is an annual, outdoor festival seeking to elevate environmental awareness and influence the way Texans think, live and work. The family-friendly and free-admission event allows leaders in the corporate, academic and non-profit worlds to unite and show Texans how green lifestyle choices can lower their cost of living, improve their health, and help save the environment.

EDTx is excited to announce that its 2015 Earth Day event will take place at Fair Park, in the heart of Dallas, Texas. The event will utilize approximately 750,000 square feet of both indoor and outdoor event space. EDTx’s footprint will easily accommodate the 1,000 exhibitors and 75,000 guests anticipated to attend this year’s event.

The heart of the festival is the Eco Expo where exhibitors will use their presence to promote their achievements as green leaders, and teach attendees how to take environmentally responsible actions by better utilizing available resources, switching to eco-friendly products, or joining their organizations.

The event’s eco-friendly initiatives helped offset nearly 300 metric tons of CO2 and diverted 70% of the event’s waste from landfills.